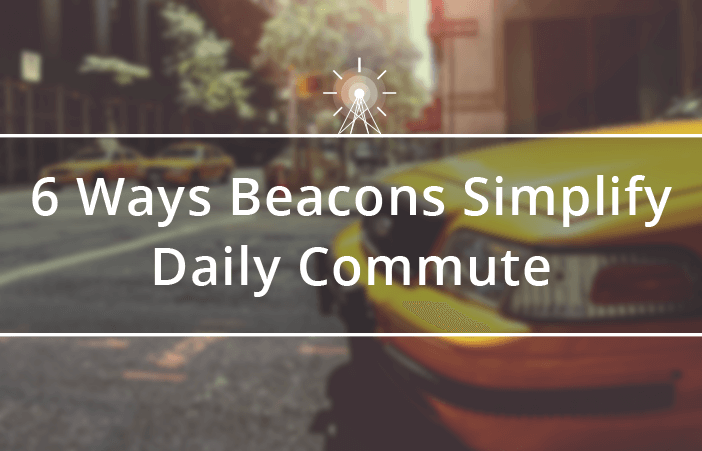 Public transport has always been considered as a cornerstone of any great city. Over several decades, various kinds of technology have enabled transport providers to provide users with an enhanced travel experience.

Mobile applications for example, enable users to keep up with public transport schedules and accordingly plan their travel, without having to spend time waiting for the next bus or train to arrive. Although these advances have created a better experience for users all over, we are still at an early stage in terms of possible innovations within this industry, especially with the advent of beacons.

In fact, beacons with their micro-location capabilities can be used to offer enhanced travel experiences. In this post, we’ll discuss 6 ways in which public transport systems can put beacons to use.

FutureRailway, a collaboration between the Rail Safety and Standards Board (RSSB) and Network Rail recently awarded Bytemark, a mobile commerce solution provider with a contract to develop a Bluetooth Low Energy (BLE) enabled mobile ticketing app.

Once completed, the FutureRailway smartphone app will offer transport operators and commuters several convenient methods for purchasing and activating rail tickets. For example, as long as the riders have turned on Bluetooth on their mobile device, they won’t even need to take their smartphone out of their pocket to verify the tickets. The new app enables U.K rail operators to verify traveller tickets as and when commuters walk through the fare gates equipped with new wireless readers. The app will offer a host of other convenient features such as access to rail schedules, a rail system map, arrival times, GPS-based location services and more.

2. To help the visually challenged with navigation –

Even the most seasoned travellers, often find London’s Underground network to be quite confusing. Especially at rush hours, the place is packed in with hordes of dissatisfied commuters, thus amplifying the problem for the visually challenged people. However, Wayfindr, a new smartphone app developed by the Royal London Society for Blind People (RLSB’s) Youth Forum and Ustwo, a digital product studio is set out to change this.

The app leverages beacons to trace a user’s location in the subway and offer him/her  audio-based directions and advice. With a total of 16 beacons installed at the subway, a prototype has recently been trialled at Pimlico station. Each time a beacon’s signal is picked up by a smartphone, the app uses bone conduction headphones that rest on the blind person’s cheeks, to give him/her turn-by-turn directions on where to head and what obstacles to avoid. At the same time, these headphones do not prevent wearers from hearing the sounds around them, thus allowing them to gather more information about the surrounding environment.

Although the initial results have been very promising, there is still a long way ahead before the Wayfindr app is rolled out to the masses as more testing needs to be done to ensure perfect coverage. However, this technology will definitely help enhance travel experience of an estimate of 7,000 blind and partially sighted children in the London region and help them feel more confident about their capabilities.

To tackle public confusion around street parking restrictions, the City of Los Angeles recently announced that it plans to install 100 new beacon-equipped parking signs along Spring and Main streets between Second and Ninth streets in downtown Los Angeles, as part of the six-month pilot program.

With many people already using apps to figure how to drive around the city of L.A, the city plans to use these beacon-equipped parking signs to communicate real-time parking data to spot-seekers via yet-to-be-developed apps for mobile phones and connected cars.  These signs will also display parking restrictions in the form of bar graphs that clearly convey where parking is and isn’t allowed, instead of the typical wording displays that many residents complain is confusing. In addition to this, the city envisions on using these beacons to accept parking payments, alert users to nearby events or even advertise nearby businesses, in the future.

While the location for the second part of the pilot project is yet to be determined, chances are that it’ll probably either be in Hollywood or other parts of Downtown and will include the gradual phase-out of the old signs until the new signs have completely replaced the existing ones.

Beacons are currently being used to help distracted smartphone users avoid accidents. In Germany, O2, one of the country’s leading digital Telecom company has kick started a campaign called ‘Watch Out!’. As part of this campaign, beacons are installed at dangerous locations.

When school kids who have installed the Watch Out! app on their smartphone, approach such dangerous locations, their mobile devices receive beacon signals. This will then display a caution message on the mobile screen by temporarily pausing all activities on the mobile device. This warns kids of such dangerous situations, and thus helps in minimizing the threat of an accident.

The digital campaign propelled by the telecom company to spread awareness about the app, was successful at reaching out to 7 million parents and saw a huge number of app downloads to the phones of teenagers. While O2 is currently launching the initiative at its headquarters in Munich, users are encouraged to support by marking dangerous locations on the Watch Out! website.

5. To send relevant offers to bus travelers in close proximity to stores –

First Group, a transport company recently partnered with Exterion Media, an out of home experience specialist and Proxama, a NFC payment firm to leverage a location-based app called Loka that uses BLE technology to send offers from nearby retail stores to potential customers who are on the move.

The experiment is part of the government funded Connected High Street Project and is rooted from the fact that, most bus journeys in urban centres today involve consumers using their smartphones to keep themselves engaged. Funded by the Technology Strategy Board, the scheme aims to drive customers to the high street  and help increase loyalty, footfall and engagement for brands, while consumers are given the trade-off of discounts and deals with the participating retailers.

At the time of trial 20 retailers signed up to the project, that claims to be the first use of beacons alongside bus transport. Learnings from the initial six month beta project will be used to shape future rollouts, that will take place on other bus networks in the UK to benefit both consumers and businesses around.

Taxi-app firm Hailo, recently introduced a service called ‘Pay with Hailo’ that uses Apple’s iBeacon technology to let users of the Hailo taxi hailing app pay drivers with their smartphone. Launched in Ireland and Boston in early September 2014, Pay with Hailo uses Bluetooth Low Energy (BLE) technology built into drivers’ and passengers’ iPhones to recognise when a passenger is in a Hailo driver’s vehicle and invite them to connect and pay for their ride via a one-click confirmation.

Once they begin to see a strong uptake of the iBeacon flow, Hailo could also plan to look at installing beacons in taxis where the driver’s device isn’t capable of emitting a signal. However, for now, they are continuing to press ahead with the existing installed base of iOS devices.

Are there any other interesting beacon use cases that we have missed out on? Let us know in the comments below.