How the armed forces are using beacon technology for recruitment 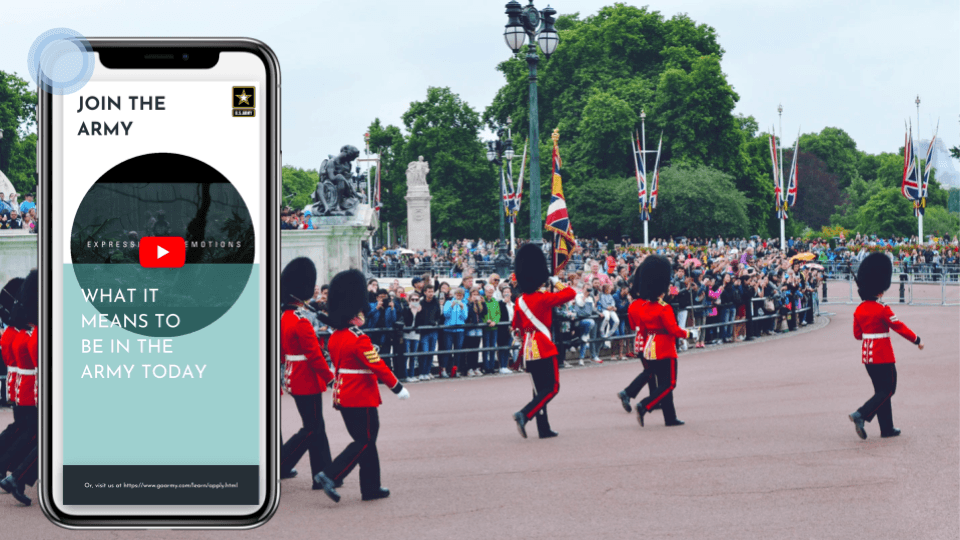 Traditionally, military recruiters have attracted young men and women into armed force by sending out television and radio ads, promoting on social media, billboards, brochures and leaflets. The Department of Defense spends approximately $40 to $45 million annually on traditional advertising.

Additionally, armed forces in Germany, Israel, Poland, UK, US and elsewhere, visit schools, including primary schools to encourage children to enlist once they are old enough. A poster used by German armed forces in schools reads, “After school, you have the world at your feet, make it safer.”

However, in the last few years, a steady decrease in print ad impressions (due to the way men and women absorb information) and the massive costs involved, have contributed to the limited success of traditional advertising in military recruitment. According to a report by RAND, the four military services are now spending relatively more on new technologies and channels of advertising. In the last couple of years, the military recruitment has made a significant shift from physical touch points to a more targeted online experience.

In this blog post, we will talk about how beacon technology is helping military recruiters and why recruitment, in general, is experiencing a massive adoption of this technology.

Why is beacon technology powerful for military recruitment?

When it comes to beacons, the results are vastly superior compared to legacy advertising channels and competitor technologies.

1. 10 billion Android and iOS smartphones are expected to have access to Bluetooth by the end of 2018. (Statista). Beacons do not need apps to transmit messages and notifications – they need Bluetooth-enabled devices. 4. Beacons have an excellent ROI – these tiny devices cost less than twenty dollars and are powered by batteries for a few years. The low cost coupled with minimal effort needed to install the beacons makes it an out-of-the-box and cost-effective solution to deploy and derive great ROI.

5. Location-based messages have pushed the needle forward in terms of personalization and hence engagement. Creative and well thought out location-based notifications have the potential to recruit the best candidates.

The first step in an enlistment process is to meet a recruiting officer. Inspire young men and women to join the army and nudge them to navigate to the nearest recruiting office. Using Beaconstac, you can implement a quick button that helps citizens navigate with the help of Google Maps. 2. Get more applications by inspiring citizens with powerful military videos

Getting into the armed forces can be overwhelming due to preconceived notions about the job. Recruiters need to tell stories of Army recruits who overcame preconceptions that they won’t fit in.

The British Army did a video about “what it means to belong in the modern army today”. It obviously grabbed a lot of eyeballs and applications. Beacon campaigns with videos witness really high engagement rates. With Beaconstac, you can embed videos to your landing pages in a few clicks. 3. Share information related to the army and careers at public realms

One of the biggest advantages of beacons is that they do not need apps to broadcast notifications. Anyone crossing the beacon with a Bluetooth-enabled smartphone can get the notification. This makes information passing to the youth really compelling.

You can send beacon notifications with interesting articles related to the history, ranks, structure and organisation of the army. You could also share a few other highly searched queries relating to military recruitment, for e.g., job vacancies in the army, special forces, the life of army families, family benefits etc.

4. Broadcast the current job openings and collect entries via a form

Sending notifications in the public realm with specific job openings is a more direct attempt at getting specialized applications based on skills and interests. Collect all the information needed so that the shortlisting process is streamlined. You can include form fields such as age, nationality, height and weight, medical history, any visible tattoos or criminal records etc.

Beaconstac allows you to create forms which can be sent as a notification. Which beacon form factor is best for these applications?

The Beaconstac hardware lineup is a combination of various small factors. These beacons can be used depending on the place where it is used.

For applications where you want to send notifications at Patriot parks, military parades, military amusement parks and in the vicinity of recruiting offices, outdoor beacons are the most recommended ones.

Whereas, for use cases in air shows and open public spaces, volunteers and recruiters could just move around with tiny pocket and keychain beacons.

If you are planning to try out beacons, take a look at Beaconstac, that includes everything you need to get started. Using Beaconstac you can set up your own campaign, without a developer’s help!