Explore this article to learn more about Apple’s iOS 13 update and how it impacts QR Code and NFC support in smartphones. 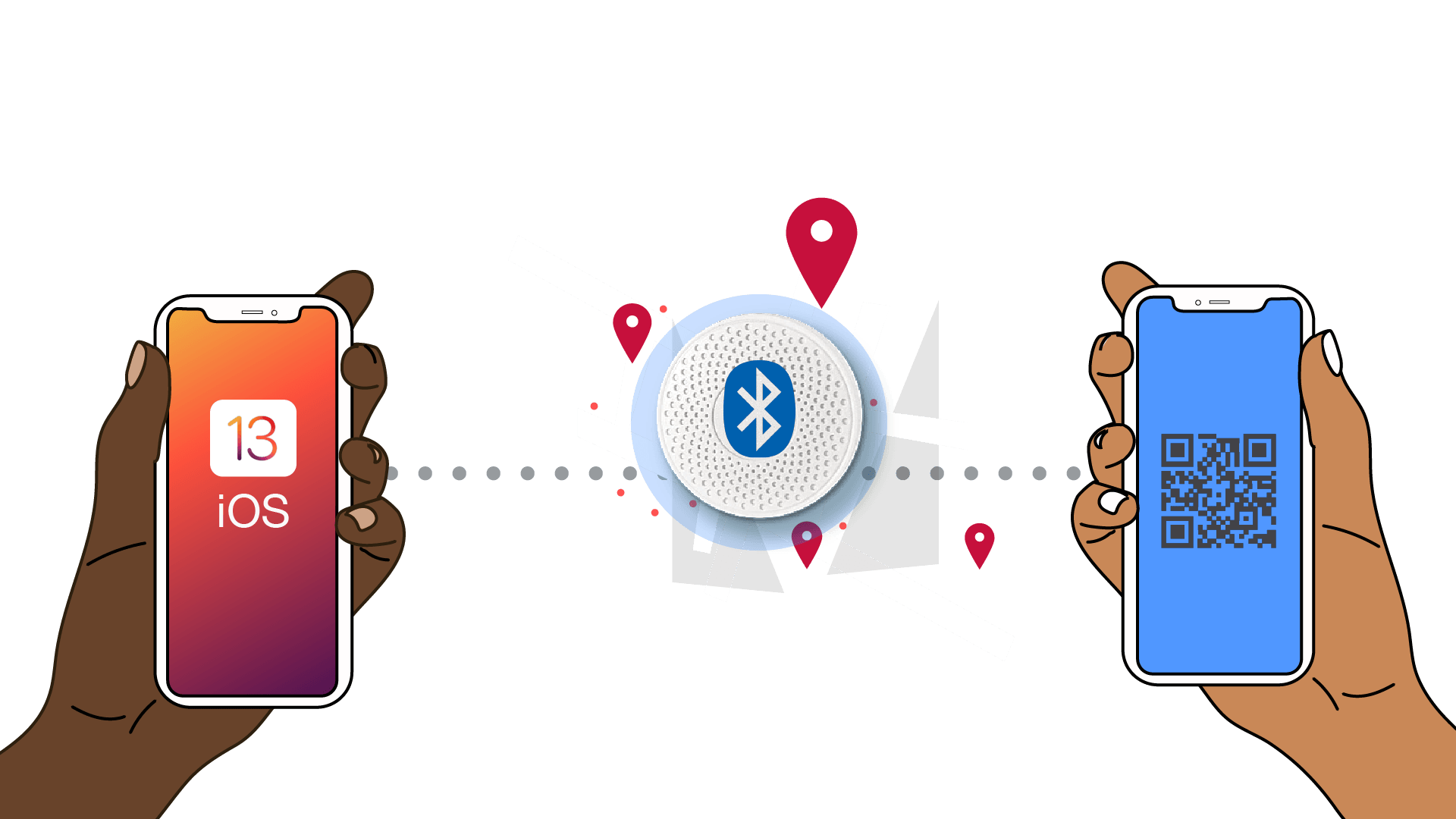 iOS 13 is tailor-made to protect the consumer’s privacy seamlessly allowing the consumer to choose permission for apps to access to their location. The new operating system protects the user’s privacy, location status and more in a rather cumulative manner. With the new iOS 13 beta launch, the user’s privacy has been further safeguarded, QR Code scanning has become faster and you can even scan QR Codes in a less than ideal light setting.

The upgrade in the functionality of Bluetooth and QR Code scanner works to the advantage of businesses and brands that want to leverage location-based marketing. The new and improved QR Code scanner means businesses now don’t have to push an exclusive app to sell their products.

UPDATE #1: Bluetooth and location permissions: What has changed?

The latest iOS 13 update has been rolled out to iPhone models 6S and above. Apple has now taken a giant leap to shield its users from third-party app trackers by fine-tuning their existing security and privacy features.

How has iOS 13 changed privacy settings in their new beta feature?

Privacy has always been at the core of every update and with this latest iOS 13 update, Apple has given users more control over their location data. It essentially brings in more transparency between third-party apps and users by asking them if they want a certain app to access their real-time location. The user can now get more granular control over how apps can access their location.

With the new operating system, apps are no longer allowed to track your location all the time. In the previous operating system, iOS 12, the apps prompted a notification asking if the user wants to “Allow While Using App”, “Always” or “Never”; meaning the users’ location was being tracked even if the app wasn’t running in the foreground. Even if the apps were running in the background, and the user had chosen the option “Always”, the app could still track the user.

In iOS 13, the user can grant access to their location on a per-use basis. When the user runs an app for the first time, they get a notification asking if they want to allow the app to track their location with the option of “Allow While Using App”, “Allow Once” or “Don’t Allow” to protect them from being tracked all the time. If the user forgets to exit the app and is running in the background, the app’s access to the location expires and, in turn, displays the prompt notification again. If, in case the user wants to let the app track their whereabouts “Always”, they can then change their settings by following this simple method – Settings > Privacy > Location Services and tap the app’s name to whitelist it.

If the user chooses to grant access to their location to certain apps by choosing “Always”, iOS 13 will prompt a notification at regular intervals reminding the user that they are being tracked. “Map prompt” divulges all the location spots collected by the app of the user. After three consecutive days, the prompt appears again, showing the location points for reconfirmation to access the user’s location.

Many apps are reliant on Bluetooth to provide location-based services, offers, and discounts. With the new iOS 13 rollout, apps need an explanation as to why they need to track the user’s location and thus, in turn, asks for permission to “Allow Access” to Bluetooth.

To change or update Bluetooth permissions in iOS and iPadOS –

Go to Settings > Privacy > Bluetooth > Toggle (On or Off)

In the earlier operating systems, the user wouldn’t be alerted whenever their Bluetooth was being used. The device granted access for it in the background. Apps using Bluetooth to access a user’s location requires the code “info.plist” to include an “NSBluetoothAlwaysUsageDescription” key explaining the requisite to access the user’s location “Always”. If the app fails to include this in its algorithm, the app crashes, and in succession, won’t be able to display any prompt at all.

Learn how to increase mobile app engagement with beacons

Find my iPhone changes with the new iOS 13

At Apple’s WWDC 2019 confab for developers, the company announced that it is merging the services previously known as “Find My iPhone” and “Find My Friends” into one standalone app – “Find My”. The Find My can locate a lost offline Apple devices by leveraging Bluetooth beacons from other Apple devices closeby.

The QR Code scanner on the new iOS 13 has changed rather marginally when compared to its predecessor iOS 12. Despite the fact that many think that they are eerily still the same, the interface on the new operating system is much smoother with better upgrades. The newer version offers amplified privacy, a flashlight option – to scan QR Codes in the dark, and a rather extensive improved QR Code scanning experience. The QR Code scanner has a dedicated spot on the Control Center so it’s always just a swipe away.

Although the new QR Code scanner is still in the Control Center, the improved QR Code scanner not only has an upgraded icon but it also now has markers that help users scan the QR Code. Upon scanning the QR Code, the scanner then performs an action based on the type of QR Code such as saving the vCard into the phone’s contact list, calling the phone number in an instant or even redirecting the user to a web page.

Scan QR Codes in the dark

The QR Code scanner in iOS 13 solves pesky low-light scanning problems once and for all. The new QR Code scanner comes with a flashlight option that can be leveraged to scan QR Codes even in the dark. However, the native Camera app used for QR Code scanning does not have this function. Only the dedicated QR Code scanner in the Control Center has the option of scanning a code using the flashlight and offers many other seamless options further alleviating the user’s woes.

To add the QR Code Scanner to Control Center –

To use the QR Code Scanner from Control Center –

Why the iOS 13 update is good for businesses and brands

The improved privacy feature on iOS 13 for Bluetooth offers users more choice, sends them a prompt every three days which is good for brand recall. This also instills trust in users showing them that companies care about data privacy. Users prefer location-based marketing as long as it does not infringe on their data privacy.

With the new flashlight option in the QR Code scanner, companies do not have to worry if their customers are able to interact with their marketing material or not since the QR Code can scan the code faster even in less than ideal lighting. This, in succession, manifests how QR Codes aren’t really dead considering Apple’s recent upgrades.

Create your own QR Code with logo

NFC (Near-Field Communication) has gone through a powerful transformation with Apple’s new iOS 13 update. Previously, iOS allowed only iPhones to read NFC tags but that changed a year ago with iOS 12. Apple encouraged its customers to scan NFC tags using background tag reading, exterminating the need to download an app exclusively for reading NFC tags. With the new iOS 13, NFC support has been acutely improved.

So, what does this imply?

The Japanese government has planned to add support NFC-tag reading to its national ID (Individual Number Card). The UK government’s NFC passport reader app, ReadID, will work on the iPhone with this new update.

Apple also revealed that it is teaming up with companies such as Bird scooters, Bonobos clothing store that offers special NFC tags that can trigger purchases with Apple Pay without the need for an exclusive app. With the new implementation, users can simply tap their phones to enjoy the experience without prior installation of an app.

Companies such as Dairy Queen, Dave & Buster’s and Caribou Coffee will also start using NFC tags to help customers sign up for their loyalty programs easily.

With the new NFC tag feature on iOS 13, users can now accomplish a variety of tasks from sharing data, mobile payments, keyless doors, and tag reading.

Best NFC use-cases to implement in your marketing campaigns

Apple has corroborated its support for NFC stickers. These NFC-enabled stickers work in favor of businesses as they make it possible to accept payments in the absence of a dedicated app and users can pay without having to go through the ordeal of the extra registration process.

With the new capabilities of the NFC tag on iOS 13, companies can now create instant sign-ups to their loyalty programs. NFC’s new overhaul can fundamentally transform consumer applications such as safer product authentication, user experience pre and post-sales, and payments. Businesses can leverage this update to further simplify customers’ overall user experience.

Not just this, with the new Siri Shortcuts app on iOS 13, users can fire an action or even set up a multi-step workflow just by scanning an NFC tag, ultimately letting users experience frictionless transactions.

Start location-based marketing leveraging the power of Beaconstac‘s Bluetooth beacons, NFC tags, and QR Codes today. Schedule a demo or talk to an expert who can guide you.